You are here: Home / Fun Dino Things / Dinosaur in Entertainment / Dinosaurs vs. Aliens 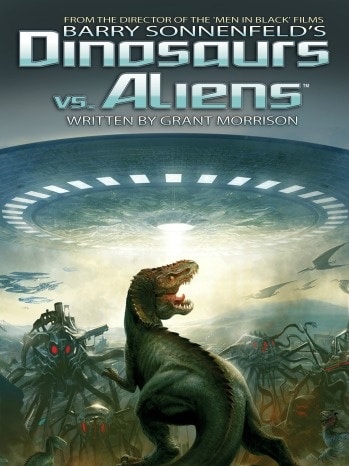 Bought to you by director/filmaker Barry Sonnefeld (The Addams Family, Men In Black) and graphic novel creator Grant Morrison (Batman, The Invisibles, All-Star Superman) together with sci-fi artist Mukesh Singh and the artists at Liquid Comics Dominion: Dinosaurs vs Aliens is a cross-platform sci-fi project like never seen before – Dinosaur loving sci-fi fans are in for a treat!

Dinosaurs vs. Aliens is a Movie Mashup

Described a a mashup of the movies Jurassic Park and Apocalypse Now (together with a little bit of the Lion King,) Dinosaurs vs Aliens tells the story of mass extinction and a war over resources set 65 million years ago when the dinosaurs ruled the planet.

In their last chance for survival the aliens must establish a new home on planet Earth but the dinosaurs are the natives and rule the planet and aren’t going to go down without a fight. When the shooting starts the dinosaurs learn to fight back using their own methods as they defend their planet.

Dinosaurs vs. Aliens is a Cretaceous Showdown

Aliens vs Dinosaurs is not just a spectacular Cretaceous showdown between two unexpected rivals, instead it also serves as a philosophical treatise which takes a look at manifesting destiny, genocide and revolution as we see an overreaching civilization at the edge of oblivion.

The aliens are portrayed in the typical sci-fi fashion being bio-mechanical and insect-like with technology on their side. They are very human-like in the way they speak and interact though, experiencing feelings of conflict, bravery, hopefulness and more as they fight for their survival.

The dinosaurs (separated into traditional and fantasy-based species) do not speak yet still manage to convey emotion with the individual characters and dino heroes coming across clearly, through being physically expressive as in a silent movie.

Turning a Graphic Novel in to a Film

Though the storytelling is told over a variety of platforms (graphic novels, motion comics and a planned feature film movie trilogy) it is all derived from the same basic world. However there will be differences between the graphic novel and film in the same way that there are with book adaptations and variations of the same movie. For example in the comic the main character, Kit, is a scientist but in the movie he will be a soldier.

Dinosaurs vs. Aliens is Told in Parts

The creators of Aliens vs Dinosaurs knew that the audience would automatically root for the dinosaurs so they have tried to avoid the “good dinosaurs / evil aliens” trap by shifting the audiences allegiance throughout the story which is told in parts.

The comic versions have been made to be stand-alone items more focused on the science-fiction story with diary-type narration which makes it slower, almost calmer where as the movies will be more action-packed and fast-paced with bigger and more epic battles between spaceships and dinosaurs as well as featuring a huge back story involving everything from Babylonian mythology to Nazi flying saucers!

For those new to the world of motion comics I should point out that this is different to film animation – Instead it combines traditional printed comic book art with animation and soundtracks meaning you’ll see stunning 2d artwork with a blinking eye or a stamping foot not an entire movie of animation ala Pixar.

Dinosaurs vs. Aliens is Available in Book Form Too

The story is also available in traditional book-form too and features the stunning and rather breathtaking artwork of graphic novel artist Mukesh Singh and Jeevan Kang together with the graphic designers at Liquid Comics – Sci-fi art fans will love it! Dinosaurs vs. Aliens may not be for everyone but it’s worth checking out.

There’s Always Room For More Dinosaur Facts Back in the beginning of July I made a post entitled “10 Dinosaur Facts Every Dinosaur Lover Should Know.” So popular was that post among my readers that I will be adding on to it over time. So here are 10 more dinosaur facts every dinosaur lover should […]

I have always been crafty. One of my favorite childhood projects was building a pterodactyl out of coat hangers and papier-mâché – now that I think of it, that’s another project I’ll have to share soon. So when I stumbled on this build your own dinosaur terrarium project over at the CraftFoxes.com website I had […]