You are here: Home / Dinosaurs / How Big Was Apatosaurus?

Apatosaurus is one of the more popular dinosaur species, although for most people it is more recognizable as the “brontosaurus.” Native to the Jurassic period, Apatosaurus is known for four species that have been discovered to date: A. ajax, A. excelsus, A. louisae and A. parvus. While Apatosaurus is also known as Brontosaurus, it has another synonym as well: Elosaurus. A member of the Diplodocidae family, this sauropod is known for its incredible long neck which researchers believe it could not have held any higher than it’s body. Apatosaurus also had a considerably long tail which it may have used in a whip like motion to scare away predators. Let’s take a look at just how big this giant herbivore was!

The Numbers On Apatosaurus!

The approximated length of Apatosaurus is around 80 feet long.

The length of the average blue whale.

…and just for fun: equal to the length of the diameter of 1150 nickels.

Estimates of Apatosaurus’ weight fall at around 36.5 short tons or 73,000 pounds.

The weight of six of NASA’s Upper Atmosphere Research Satellite’s.

The weight of 73 large Jersey cows.

Current estimates put the height of Apatosaurus at around 30 feet tall in total and around 16 feet tall at the hips.

The height of a fully grown flowering dogwood tree.

The height of three Triceratops.

…and just for fun: equal to the height of 5,899 pennies stacked on top of each other. 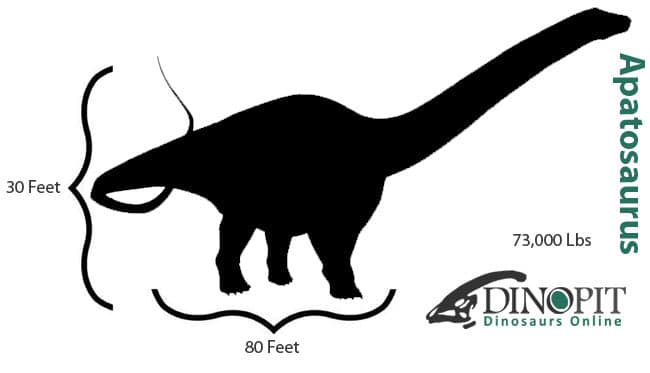 Apatosaurus may have been incredibly large but amazingly, it was not the largest of all dinosaur species! With that said though, there’s still no way I’d like to be underfoot as this herbivore roamed the land. Can you imagine being trapped underneath Apatosaurus’ four huge columnar legs?

Everyone Wants To Know: What is the Biggest Dinosaur? Yesterday I covered ten dinosaur facts that every dinosaur lover should know and it got me to thinking about the biggest dinosaur species out there. One of the most often asked questions among dinosaur lovers and even those less intrigued by dinosaurs is: what is the […]

Of all the burning questions biting at the public’s subconscious, one query stands alone: who would win in a fight, T-Rex or Godzilla? Let’s explore this question and see exactly why T-Rex is the clear victor here. The Obvious Question – Does Size Matter? The Tyrannosaurus Rex was a huge animal, scaling in at 40 […]