You are here: Home / Dinosaurs / How Big Was Megalodon?

Megalodon is Not a Dinosaur

Megalodon or”Big Tooth” is not actually a dinosaur, but this prehistoric shark species is often mistakenly referred to one. Dinosaur or not, Megalodon is a fascinating prehistoric creature with some of the biggest jaws you will ever set eyes on. With incredibly large teeth that frequently measure in at more than 7 inches long, this creature was a force to be reckoned with during the Late Oligocene-Early Pleistocene eras around 28–1.5 million years ago. This was some 37 million years after the extinction of the dinosaurs but for the sake of studying one more awe inspiring creature let’s take a look at just how huge this creature of the deep was.

The Numbers On Megalodon!

The approximated length of Megalodon is between 52 – 67 ft feet long.

An average length of  around 60 feet is equal to:

The length of a large bow-head whale.

The length of a large sperm whale.

Approximately the length of a giant squid.

The same weight as a 65 American bison.

The approximate weight of 87 polar bears.

7 inches is equal to:

The approximate height of a downy woodpecker.

The length of a large giant cicada.

The height of the northern saw-whet owl.

…and just for fun: equal to the height of 115 pennies stacked on top of each other. 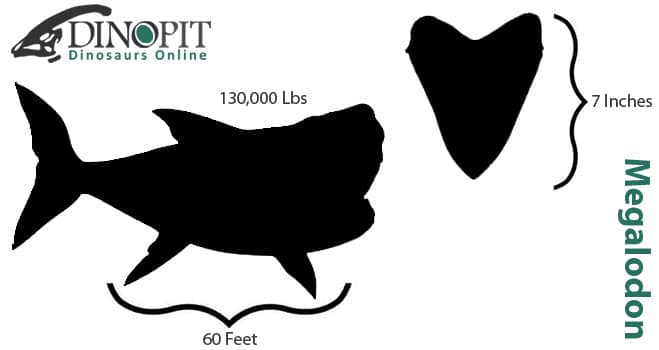 Megalodon may not have been a dinosaur but in terms of size and proportions, this prehistoric shark certainly measures up!

Troodon goes down in record as potentially being the smartest dinosaur to walk the Earth. This Cretaceous period Theropod was a late Cretaceous marvel and paleontologists believe that this bipedal carnivore was a nocturnal hunter. Researchers suggest that this lightweight Maniraptora was built for speed and its long fingers were likely used to catch and […]

When it comes to dinosaur DVD’s there are a good many out there to choose from. I tend not to be too picky about the ones I choose to watch though since I have a constant stream of dinosaur DVD’s playing as I work. If I do want a good one to watch when I’m […]