You are here: Home / Dinosaurs / How Big Was Triceratops?

Triceratops is a Crowd Favorite

Triceratops will always be one of the most popular dinosaur species but this herbivore was far from the gentle giant it is often portrayed to be! When threatened, researchers believe that Triceratops would have charged much like a common day rhinoceros, using it’s three foot long cranial horns to impale predators. Unlike the horns of rhinoceroses, the horns of this dinosaur, as well as the large frills around their necks were made completely of bone. These solid structures gave Triceratops a unique advantage that many other herbivores and contemporaries of Tyrannosaurus Rex lacked. Let’s take a look at just how big this late Cretaceous herbivore was.

The Numbers On Triceratops!

The approximated length of Triceratops is around 26 feet long.

The length of a 5 to 7 room moving truck.

The length of two Siberian tigers.

…and just for fun: equal to the length of 793 sugar ants.

Estimates of Triceratops weight fall at around 14,000 pounds.

The weight of 28 Eastern Lowland Gorillas.

Current estimates put the height of Triceratops at around 7 feet tall at the hips and around 9.5 feet in total.

The approximate height of a male polar bear.

The height of an average African elephant.

The height of a Sumatran rhinoceros.

…and just for fun: equal to the height of 1,869 pennies stacked on top of each other. 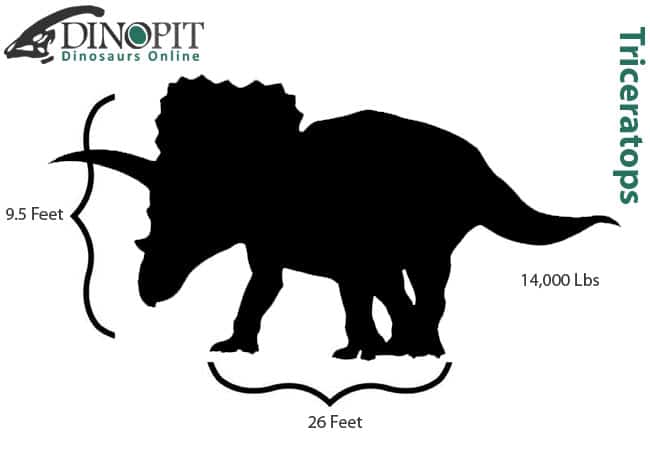 This 9.5 foot tall beast may have been an herbivore but it was also a three horned charging machine! This beaked tank of a dinosaur didn’t take challenges lightly, even Tyrannosaurus Rex dreaded a run in with Triceratops.

Finding Make a Dinosaur Tail Instructions It’s make a dino Monday and today I’ve been checking out Tater Tots and Jello! I ran across the idea of making dinosaur tails through Pinterest and that sent me on a mission to finding easy to understand “make a dinosaur tail” instructions. I eventually found what I was […]