You are here: Home / Dinosaurs / Just How Big Was Seismosaurus?

Seismosaurus goes down in the record books as one of the longest land mammals to ever live. One of the most impressive features of this sauropod (beside its incredible size) is the exceptionally long and whip shaped tail that was likely utilized to stun predators. Researchers believe that the sound alone from a whipping Seismosaurus tail would have deafened predators while getting caught in it’s line of fire would have been brutal! Let’s take a look at just how huge this giant sauropod was.

Take a look at some Seismosaurus Numbers!

The estimated length of Seismosaurus is approximated to be 130 – 170 feet.

Taking the average of this size range, 150 feet is equal to:

…and just for fun: equal to the length of the diameter of 2156 nickels.

Estimates of Seismosaurus’ weight vary but it is believed to have weighed in at around 100 tons or 200,000 lbs.

Just over a quarter of the size of the Statue of Liberty.

Around one and a quarter of the size of the height of the Egyptian Sphinx.

…and just for fun: equal to the height of 16,470 pennies stacked on top of each other. 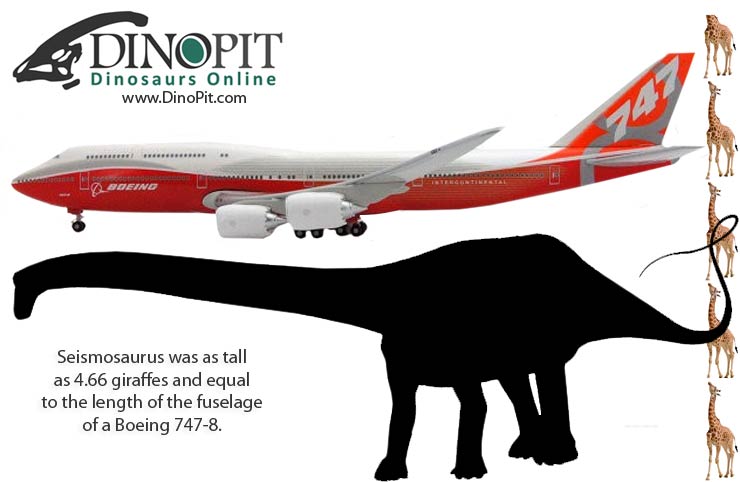 Would you want to share the city with a fully grown Seismosaurus?

Troodon goes down in record as potentially being the smartest dinosaur to walk the Earth. This Cretaceous period Theropod was a late Cretaceous marvel and paleontologists believe that this bipedal carnivore was a nocturnal hunter. Researchers suggest that this lightweight Maniraptora was built for speed and its long fingers were likely used to catch and […]

I have been a dinosaur nerd for just about as long as I can remember. I’m pretty certain it’s not exactly what my parents had hoped for – a little girl in her best Sunday dress, up to her elbows in mud as she excavates the back yard for dinosaur bones, but it’s what they […]