The first dinosaur fossils were discovered in the early 1800s; since then, people have wondered deeply about the nature of the sometimes larger-than-life bone remnants.  Due to the absolute monstrous nature of the prehistoric finds, it wasn’t long before enthusiasts and natural artists began to speculate about the physical appearance of the live creatures.

Over time, the original keepers of such bones have endured as major sources of fascination for man, woman and child alike.  Much time and energy is invested into the enjoyment and study of dinosaurs, and some actually create some of the most beautiful and realistic representations of them based upon the finds that are uncovered over time. 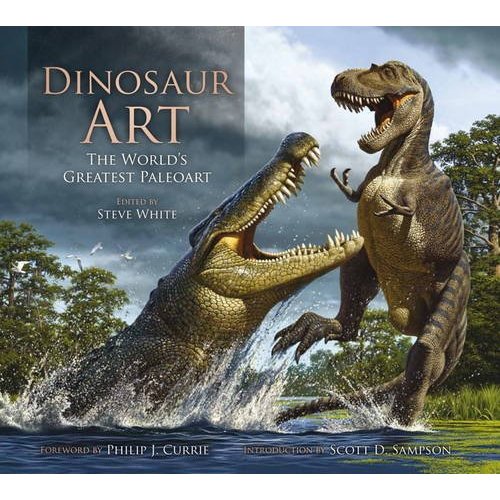 Paleoartistry is a Popular Niche

Paleoartistry has developed as a popular niche world of artistry for those who are fascinated by dinosaurs and wish to communicate that fascination into each and every representative piece of work.  From the 1830 painted piece by Henry de la Beche (first known color painting of the prehistoric world) to the modern sculpture of David Krentz, dinosaur fossils are lovingly and painstakingly morphed into the artists’ visions of reality.  Over time—as scientists have come to understand more about the nature of the dinosaurs—artistic renditions have become more accurate.  Although, this is not to say they are any more or less imaginative and at the same time solid in their depictions.

Consider the la Beche paleoart watercolor from 1830, Duria Antiquior, which features a quite colorful prehistoric landscape and scene of activity.  The work itself is based upon fossils found in Lyme Regis, and it influenced several other artists to do the same.  This work also gets credit as the first depiction to be used in marketing efforts, since the artist ordered up prints to be used in the money-raising efforts to fund his friend and professional fossil-finder Mary Anning.  Eventually the print was used for educational purposes, and therefore widely circulated in relevant circles.

Of the most popular themes to behold in paleoartistry is that of predation—to capture the act of dinosaurs and other prehistoric creatures as they subsisted by feeding upon those in their food pyramid that they could.  La Beche considered capturing the carnivorous nature of some dinosaurs in his piece described above, and since then there have been many such depictions.

By the turn of the twentieth century, there were many more prints out concerning dinosaurs and their living and feeding habits.  These often went along with stories that were told which capitalized on the existence of dinosaurs and at the same time helped more people to understand what could have been possible in the world around us, had things gone differently.  Eventually, dinosaurs were destined for the land of Hollywood, where previous depictions came into play along with the most modern ideas of dinosaurs and the various ways in which they could affect the world around them.

Modern paleoart runs the gamut from painting and prints to sculpture and stories, movies and even video-games.  Water-color, acrylic, clay or stone—dinosaurs continue to be discovered, studied and depicted for all to see, understand and even participate in that prehistoric world. As its popularity increases, paleoartistry unlocks doors with its creativity and helps us to further understand life as it once was.

The Web Is Ripe With Free Dinosaur Games I’m not too much of a game player…well, I can kill a game of Scrabble but when it comes to video games I tend to throw down the remote and run away screaming then things pop out at me. The problem with this is that in dinosaur […]