You are here: Home / Fun Dino Things / Dinosaur in Entertainment / Primeval Seasons 1 and 2 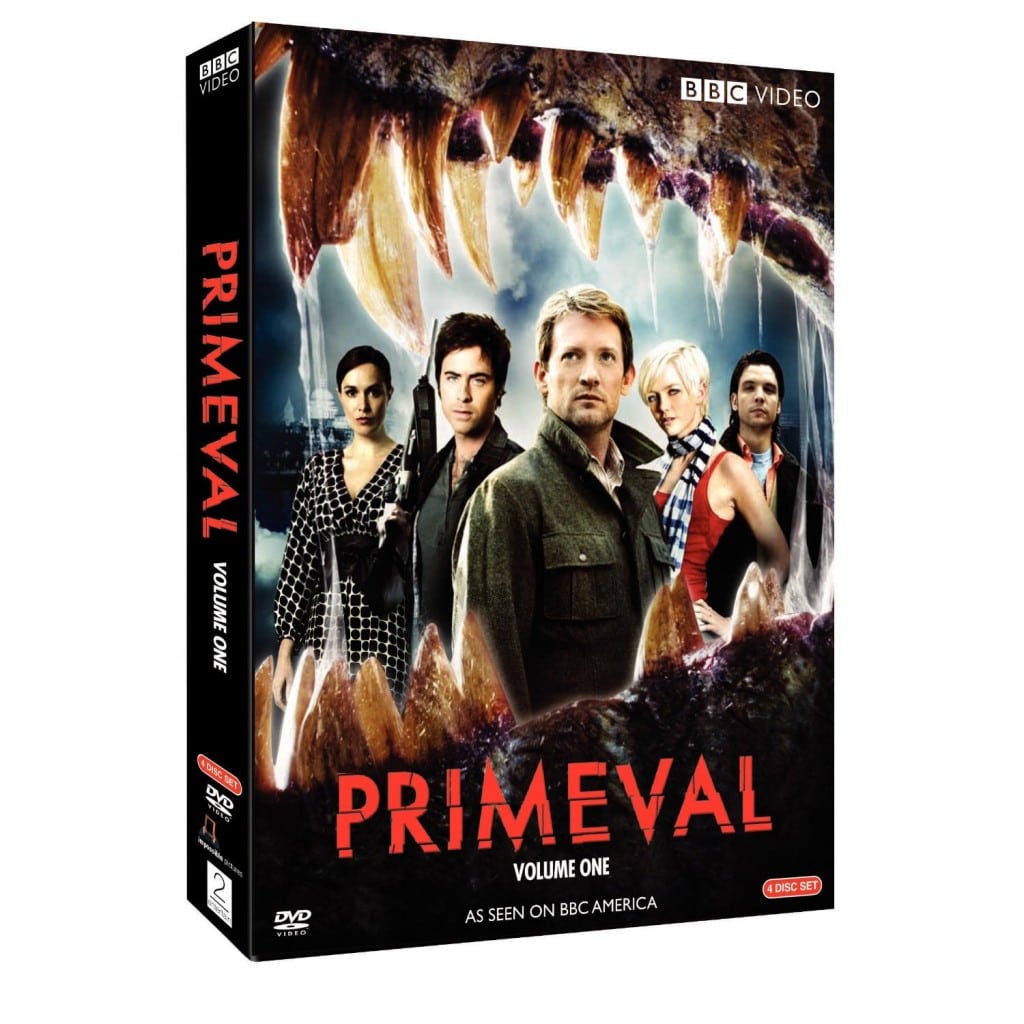 I almost always work with background noise which is why I love my Netflix subscription. Late last week after I’d finished my latest DVD series on Netflix I went looking for something new to watch and found myself testing out Primeval. I wasn’t sure that I’d like it and to be honest I’m still not certain I do…but then I loved the first season. I’m a late starter to the Primeval series, in fact there are already five seasons out on DVD, but that just leaves more for me to watch now.

The First Season of Primeval Had Me Hooked

I admit to watching the first season of Primeval all the way through. I wanted more and (thanks to Netflix) there was more so I just kept hitting the play button. There was plenty of variety in the dinosaur species they featured and the whole concept of rifts in time had me sucked in. If you are new to the series let me recap:

Anomalies keep appearing in present day England. These anomalies are actually rifts in time that provide access to and from history – and we later find out the future as well. A group of individuals get thrown together when a giant prehistoric beast makes it through one of these anomalies and wrecks havoc on a small English town. As the series progresses the team is charged with chasing down “creatures” that come through these anomalies and either throwing them back or capturing them. The only problem is that as time goes on the anomalies are becoming much more frequent and soon the general public is going to find out. The question is, can the team charged with spotting and monitoring these anomalies keep things under wraps?

The Second Season of Primeval…Not So Much

I likened Primeval to Dr Who meets Fringe meets Jurassic Park meets a little bit of Jack Bauer when I watched the first season. The problem with the second season so far is that things are getting a little too much like Fringe for my liking. Remember how Fringe used to be pretty awesome? Then they took it and mashed it all up with some crazy parallel universe characters and things just got…weird? The second season of Primeval started mashing things up and I can’t say that I like it so far. I’m still vested in the characters and the story line so I’m still watching but certainly not with as much excitement as I was during the first season.

I find myself a little disappointed by the future creatures, having flashbacks to old school Dr. Who. I can’t help wanting more dinosaurs but even if they couldn’t oblige that, I’d like to see a little more…something and a little less crazy rubber costumes going on.

My final peeve with this season so far? Lucy Brown. I don’t want to dislike her but her acting just doesn’t do it for me. Now Hannah Spearritt I can live with.

The Third Season of Primeval…

You’re going to have to wait for this one because I still have two episodes to go before I finish season 2.

Want to check out Primeval for yourself? Watch Primeval live through Amazon for free if you have Amazon Prime, or check it out on Netflix!

Microceratops is a far cry from the 14,000 lb Triceratops from the same Ceratopsia infraorder. Weighing just 4 lbs, this herbivore sported a sharp beak and along with Psittacosaurus was one of the first Ceratopsians to be found in Mongolia. Feeding on cycads and ferns, this miniature dinosaur would have used its beak to snip […]

See What Toys Made the Top Dinosaur Toy List The holidays are just around the corner – seriously, have you seen the Christmas displays going up already? Well they’re going up right and left here and that means that it’s the right time to start thinking about gift ideas for that special someone. As a […]